So, I read Blood Rights, the first book in the House of Comarre series and really liked it.  Though there were some things that bothered me, they were far outweighed by all the things I did like.  An interesting, unique take on the supernatural world set in the near future.  I'm always on the lookout for a new series that can give a spin on the same old/same old and I thought I had found it with this one.
And then I read book two in the series.
As much as I enjoyed the first, that is how little I liked the second.
So, one book I loved really liked and the other that annoyed the fuck out of me.  Third times the charm, I thought and started Bad Blood, the next book in the series.
And I couldn't do it.
I made it to page 166 and had to stop.  Now, it's rare for me to not finish a book.  My book obsession compels me to finish the books I start, even if it is only skim-reading them till the end.  But I couldn't even skim through this one.  I just knew that the problems I had with the characters were not going to get any better.  And I am incredibly disappointed.  I had such hopes for this series.
Below the jump, you can read what I thought about the first third of Bad Blood. 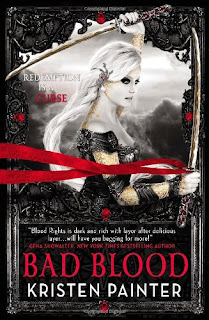 Bad Blood by Kristen Painter
House of Comarre, #3
ISBN 0316084751
ISBN13: 9780316084758
Published December 1st 2011 by Orbit
Grade: DNF
Blurb:  Samhain approaches, bringing with it the final melding of the mortal and othernatural worlds. No one knows just how much power the night holds...
Violent murders occur in Paradise City as counterfeit comarré are systematically hunted. The police and the Kubai Mata have more than enough trouble to keep themselves occupied. As war erupts at home, Malkolm and Chrysabelle head to New Orleans to recover the Ring of Sorrows. Chrysabelle is forced to make a life and death decision and will realize that her relationship to Malkolm may have fatal consequences.
The clock is ticking . . .

This is a trite, manipulative, over-the-top, story that manages to also be boring.  Events come across as contrived and make me think they are there solely to evoke a certain response in the reader instead of feeling necessary or even organic to the story.  At times the character's actions seemed illogical and often downright silly in an awkward attempt to manipulate a specific outcome.

My biggest problem with this book (and the series), is how melodramatic and emotionally self-indulgent the characters are. Everyone is a fucking drama queen. Superficially drawn, the more we spend time with them, the shallower they become until they have been reduced to the Ghost. the Shapeshifter, the Vampire, the Evil Vampire, the Sexy Evil Vampire, and the Very Special Snowflake.

In book two, Chrysabelle met with the Aurelian who dropped a big ol’ bomb on her, revealing that Chrysabelle has a brother.  Naturally, Chrysabelle is now all I-Must Find-Him!  And she figures the best way to do so is to return to the Aurelian and press for more information. This, despite being told that she would know her brother by his signum.  So does Chrysabelle try to figure out what that means?  Does she try to unravel the mystery?  Nope. The dumb cow decides the best course of action is to go through an incredibly painful procedure to return the signum to her body less than two weeks after it had been cut from her flesh and then go back to the Aurelian and ask again.  This does not seem like the best use of her time and quite frankly, just makes Chrysabelle come across as even dumber than in the previous books. (Who knew that was possible?)

She’s in good company, though, ‘cause none of these characters seem all that bright. They trust each other too fast, they share super secret info with each other at the drop of a hat, and they make stupid choices. If these characters were in a haunted house and a disembodied voice told them to Get Out, they’d go down to the basement – without a flashlight – instead.

The tension between Chrysabelle and Mal felt artificial, existing more to keep them apart than coming out of believable behavior. And the groundwork for the tepid love triangle between Chrysabelle/Mal/Creek was never properly laid so there was no need to invest in it.

Then there is the villain, a stock character out of Villain 101. While certainly villainous, Tatiana is also obvious and ham-handed in her villainy. I cannot buy that the other characters don’t see through her machinations. She is chock full of evil mustache-twirling; it is difficult to buy that so many others fall for her schtick. Unbelievable so.
The choices these characters make, the actions they take to achieve their ends, are inefficient and the risk assessment is much higher than other more logical courses of action.  The only way I am able to suspend my disbelief is by believing that they are all dumber than boxes of rocks.  The artificial emotional justification used does not, in fact, justify the action, it just makes the characters seem like they should be on a soap opera.

This series could have been good.  Neat take on the world building, nice mythology, lots of interesting supernatural creatures and instead, it is all squandered on a soap opera of a tale that makes Dynasty look like Tolstoy.  I wanted so much more from this series.

So, this one is a DNF because of all the previously mentioned stuff and because, at one point, the Cuban character (the mayor of Paradise City), actually says Ai yi yi.
Grade: DNF


Where'd I Get It: from the publisher