It's About Time - Book Pimpin!

It's been such a long time since I've book pimped that a chunk of books on my Upcoming list have already been released.  I figured that maybe it was time I posted another Pimpin post.  Below are some of the books I am excited to check out in the next few months. I absolutely cannot wait to read Spirit's End by Rachel Aaron.  I love this series and am expecting a thrilling conclusion.  The Bornikova book also sounds real promising.  Influenced by The Firm and Anita Blake? - hopefully, that means influenced by both series' strengths and gives us a savvy, action-packed, thriller with twists and crafty turns as opposed to merely a supernatural lawyer fuck-fest.  Anyway, these are all auto-reads for me.  Check 'em out.  See what catches your eye.

This Case Is Gonna Kill Me by Phillipa Bornikova
What happens when The Firm meets Anita Blake? You get the Halls of Power—our modern world, but twisted. Law, finance, the military, and politics are under the sway of long-lived vampires, werewolves, and the elven Alfar. Humans make the best of rule by “the Spooks,” and contend among themselves to affiliate with the powers-that-be, in order to avoid becoming their prey. Very loyal humans are rewarded with power over other women and men. Very lucky humans are selected to join the vampires, werewolves, and elves—or, on occasion, to live at the Seelie Court.
Linnet Ellery is the offspring of an affluent Connecticut family dating back to Colonial times. Fresh out of law school, she’s beginning her career in a powerful New York “white fang” law firm. She has high hopes of eventually making partner.
But strange things keep happening to her. In a workplace where some humans will eventually achieve immense power and centuries of extra lifespan, office politics can be vicious beyond belief. After some initial missteps, she finds herself sidelined and assigned to unpromising cases. Then, for no reason she can see, she becomes the target of repeated, apparently random violent attacks, escaping injury each time through increasingly improbable circumstances. However, there’s apparently more to Linnet Ellery than a little old-money human privilege. More than even she knows. And as she comes to understand this, she’s going to shake up the system like you wouldn’t believe….
Drops September 4th 2012

Howl For It by Shelly Laurenston, Cynthia Eden
They hunger for your pleasure. They growl for your touch. And in these sizzling stories by New York Times bestselling author Shelly Laurenston and Cynthia Eden, these sexy wolf shapeshifters are lust at first bite. . .
"Like A Wolf With A Bone" by Shelly LaurenstonQuiet little Darla Lewis couldn't be happier when the most-feared member of the South's rowdiest pack kidnaps her. A girl gets real tired of being overprotected by her own shifter family, and there's nothing like an oh-so-big bad wolf to start a pack feud, unleash her instincts--and have her surrender however and whenever she wants. . .
"Wed Or Dead" by Cynthia EdenGage Ryder knew his human bride had a wild side. But spending their honeymoon night on the run from hunters out to finish him and his pack is sure not the kind of fun he was looking forward to. No problem--Gage will do whatever it takes to lay bare Kayla's secrets and find the truth. If he can keep from being captured by his own seductive game. . .
Drops August 28th 2012

Spirit's End (the Legend of Eli Monpress, #5) by Rachel Aaron
Eli Monpress is clever, he's determined, and he's in way over his head.
First rule of thievery: don't be a hero. When Eli broke the rules and saved the Council Kingdoms, he thought he knew the price, but resuming his place as the Shepherdess's favorite isn't as simple as bowing his head. Now that she has her darling back, Benehime is setting in motion a plan that could destroy everything she was created to protect, and even Eli's charm might not be enough to stop her. But Eli Monpress always has a plan, and with disaster rapidly approaching, he's pulling in every favor he can think of to make it work, including the grudging help of the Spirit Court's new Rector, Miranda Lyonette.
ut with the world in panic, the demon stirring, and the Lord of Storms back on the hunt, it's going to take more than luck and charm to pull Eli through this time. He's going to have to break a few more rules and work with some old enemies if he's going to survive.
Drops November 20, 2012

Steel's Edge (The Edge, #4) by Ilona Andrews
The Edge lies between worlds, on the border between the Broken, where people shop at Wal-Mart and magic is a fairy tale—and the Weird, where blueblood aristocrats rule, changelings roam, and the strength of your magic can change your destiny…
Charlotte de Ney is as noble as they come, a blueblood straight out of the Weird. But even though she possesses rare magical healing abilities, her life has brought her nothing but pain. After her marriage crumbles, she flees to the Edge to build a new home for herself. Until Richard Mar is brought to her for treatment, and Charlotte’s life is turned upside down once again.
Richard is a swordsman without peer, future head of his large and rambunctious Edger clan—and he’s on a clandestine quest to wipe out slavers trafficking humans in the Weird. So when his presence leads his very dangerous enemies to Charlotte, she vows to help Richard destroy them. The slavers’ operation, however, goes deeper than Richard knows, and even working together, Charlotte and Richard may not survive...
Drops November 27, 2012

Angel's Ink (The Asylum's Tales, #1) by Jocelynn Drake
The series is firmly settled in the urban fantasy genre, set in what I like to call an open world (ie, everyone knows about all the other races and has for a really long time, allowing everyone to live side-by-side in a relative, occasionally strained, harmony.) Some of the races that you meet in this series include, but are not limited to: humans, elves, trolls, dwarves, pixies, werewolves, vampires, ogres, minotaurs, incubus, faeries, goblins, and many many more that are fighting to get their time on the page.
At the center of this mess is Gage Powell, a tattoo artist who owns a parlor in a sketchy little neighborhood in Low Town called Asylum. In a world that is naturally filled with magic, it only makes sense that many of the non-magic folk (like humans) could use an edge. In this world, tattoo artists aren't just tattoo artists. They are also licensed potion stirrers. For the right price, they can help you get an edge. Need courage, love, or luck? A tattoo artist can stir a potion to be placed in the ink of a tattoo that can help you achieve those things.
Unfortunately, Gage has a secret that keeps coming back to haunt him despite his attempts to keep his head down and his nose somewhat clean. Lucky for him, he had a pair of employees that help him out. The first is Bronx -- a patient troll who manages to keep a level head and his sense of humor when things get bad. The second is Trixie -- a elf who is pretending to be a human because she's got her own problems, but she still manages to make time to give Gage a hand when he needs it.
Drops October 16, 2012

Shadow's Claim (Immortals After Dark: The Dacians, #1) by Kresley Cole
He won’t be denied
Trehan Daciano, known as the Prince of Shadows, has spent his life serving his people, striking in the night, quietly executing any threat to their realm. The coldly disciplined swordsman has never desired anything for himself—until he beholds Bettina, the sheltered ward of two of the Lore’s most fearsome villains.
She’s bound to another
Desperate to earn her guardians’ approval after a life-shattering mistake, young Bettina has no choice but to marry whichever suitor prevails—even though she’s lost her heart to another. Yet one lethal competitor, a mysterious cloaked swordsman, invades her dreams, tempting her with forbidden pleasure.
A battle for her body and soul
ven if Trehan can survive the punishing contests to claim her as his wife, the true battle for Bettina’s heart is yet to come. And unleashing a millennium’s worth of savage need will either frighten his Bride away—or stoke Bettina’s own desires to a fever-pitch....
Drops November 20, 2012

Urban Fantasy is a funny thing.  By its very name, it should have a contemporary city setting but there are a lot of books termed urban fantasy that have nothing to do with cities at all.  Take The Shadow Reader by Sandy Williams. The heroine spent much of the book being held captive in various isolated locations.  I never had the sense that she was even near a city, let alone in one.  There's also a certain tone urban fantasies have that was missing from this story.  This book felt more like a classic fantasy that was occurring in present day.  This is not a criticism of the book, by the way.  Merely an observation but if anything, I would categorize The Shadow Reader as Contemporary Fantasy. 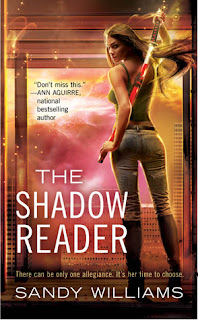 Some humans can see the fae. McKenzie Lewis can track them, reading the shadows they leave behind. But some shadows lead to danger. Others lead to lies.
A Houston college student trying to finish her degree, McKenzie has been working for the fae king for years, tracking vicious rebels who would claim the Realm. Her job isn’t her only secret. For just as long, she’s been in love with Kyol, the king’s sword-master—and relationships between humans and fae are forbidden.
But any hope for a normal life is shattered when she’s captured by Aren, the fierce and uncompromising rebel leader. He teaches her the forbidden fae language and tells her dark truths about the Court, all to persuade her to turn against the king. Time is running out, and as the fight starts to claim human lives, McKenzie has no choice but to decide once and for all whom to trust and where she ultimately stands in the face of a cataclysmic civil war.

There were several aspects about this book I liked.  I enjoyed the politics – the rebels against the realm storyline, while not new, was suitably entertaining, there was some nice action sequences and the two male leads were recognizable but enjoyable beefcake-y types.  Kyol is all honor-bound and restrained while Aren is volatile, bad boy danger.  Clichéd, yes… but still effective.  And shadow reading is a new and inventive ability that captured my imagination.  I only wish the heroine got to use her ability more often instead of spending most of her time as a damsel-in-distress.

But Wait, There's More
Posted by Unknown at 3:19 PM No comments: