Sometimes you read a book that is so emotionally enthralling that, once finished,  you need a cooling off period, a chance for the tumultuous, rapturous feeling it gave you to settle down.  You can't pick up another book for a little while.  You were swept in so deeply that you need a little time to resurface.  That's how I felt about Sacrificial Magic.  It's so good that it almost hurts.  I would fuck this series, that's how much I love it. 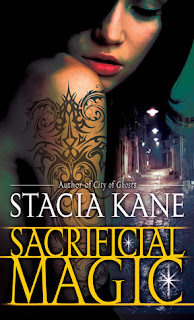 Sacrificial Magic by Stacia Kane
(Downside Ghosts, #4)
ISBN: 0007349068
ISBN13: 9780007349067
Published March 27th 2012 by Del Rey
GRADE: A+
Blurb: When Chess Putnam is ordered by an infamous crime boss—who also happens to be her drug dealer—to use her powers as a witch to solve a grisly murder involving dark magic, she knows she must rise to the challenge. Adding to the intensity: Chess’s boyfriend, Terrible, doesn’t trust her, and Lex, the son of a rival crime lord, is trying to reignite the sparks between him and Chess.
Plus there’s the little matter of Chess’s real job as a ghost hunter for the Church of Real Truth, investigating reports of a haunting at a school in the heart of Downside. Someone seems to be taking a crash course in summoning the dead—and if Chess doesn’t watch her back, she may soon be joining their ranks.
As Chess is drawn into a shadowy world of twisted secrets and dark violence, it soon becomes clear that she’s not going to emerge from its depths without making the ultimate sacrifice.


There's a suspenseful, action-packed, twisty story here with murderous magical types, deadly ghosts, rival drug dealers and, oh, so many secrets.  The plot is tight, the story engrossing, and it doesn't feel like there is a wasted scene in the book.  From start to finish, it is can't-put-down.

But the best part is the characters.  I love Chess, I love Terrible and I love the two of them together.  There's a scene in the book that is - Damn! - so hot.  The kind of hot that gives you shivers.  It's sexy as hell and emotionally passionate.  It's a great scene, Chess and Terrible in a car, the rain pouring down, desperate for each other, desperately in love with each other.  These two are fucked up individuals but together their relationship is incredibly romantic, dramatic without being melodramatic.  There is something emotionally genuine about this couple.

Stacia Kane does a terrific job depicting damaged people without info dumping or looking for pity.  She writes Chess in such a way that it is hard to not feel compassion for her.  Chess has many inner demons, she is so flawed but we always care about her.  We know that Chess has been abused, we know she is a drug addict, we know that she can't bear to hear her own thoughts, we know that she thinks she is worthless, undeserving of anything good.  and we see in Chess's behavior how that past abuse has shaped the person she has become.

That's the key, what makes this series so riveting.  The reader gets to see it all on the page.  Kane doesn't tell us, she shows us.  And despite falling in love and being loved deeply in return, Chess is not "cured" of her problems.  In the world of the Downside Ghosts,  love doesn't solve everything - just like real life.

Listen, if you haven't read any of the books in this series, don't start here.  I mean, you could. The mythology, the mystery, and the characters are all clear.
But start with the first book.  Take this journey from the beginning.  Individually, the books are real good but the depth of the world building, the action-based plots and the layered characterization are great.  To truly appreciate it, you need to read the whole series.
GRADE: A+

Where'd I Get It: bitch, please... I Pre-Ordered this one from the bookstore.  Worth every penny.