Kresley Cole writes fun, readable books set in the world of the Lore that are always amusing if not laugh out funny.  Her characters are primarily of the fantastical type - there are Valkeries, Shifters, Demons, Sorcerers, and, of course, Vampires - and Cole has nicely crafted a detailed mythology for each race.   The series is set during the Assession, a period that occurs every 500 years when the different factions of the Lore battle it out for supremacy.
And that time is now.
So there is lots of action in this series, lots of adventure, and a sweet amount of sexy shenanigans.  It's a really enjoyable series and I look forward to each new installment.  When Lothaire showed up in my mailbox, I started reading it right away... 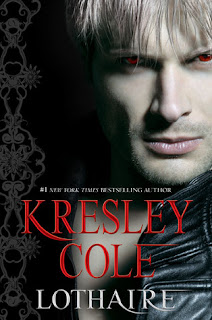 Lothaire by Kresley Cole
Immortals After Dark, #12
ISBN 1439136823
ISBN13: 9781439136829
Published January 10th 2012 by Gallery Books
GRADE: C
Blurb: ALL FEAR THE ENEMY OF OLD
Driven by his insatiable need for revenge, Lothaire, the Lore’s most ruthless vampire, plots to seize the Horde’s crown. But bloodlust and torture have left him on the brink of madness—until he finds Elizabeth Peirce, the key to his victory. He captures the unique young mortal, intending to offer up her very soul in exchange for power, yet Elizabeth soothes his tormented mind and awakens within him emotions Lothaire believed he could no longer experience.
A DEADLY FORCE DWELLS WITHIN HER
Growing up in desperate poverty, Ellie Peirce yearned for a better life, never imagining she’d be convicted of murder—or that an evil immortal would abduct her from death row. But Lothaire is no savior, as he himself plans to sacrifice Ellie in one month’s time. And yet the vampire seems to ache for her touch, showering her with wealth and sexual pleasure. In a bid to save her soul, Ellie surrenders her body to the wicked vampire, while vowing to protect her heart.
CENTURIES OF COLD INDIFFERENCE SHATTERED
Elizabeth tempts Lothaire beyond reason, as only his fated mate could. As the month draws to a close, he must choose between a millennia-old blood vendetta and his irresistible prisoner. Will Lothaire succumb to the miseries of his past . . . or risk everything for a future with her?

So, let’s start with the heroine.  In Lothaire, she is human and the fated mate of said title character.  I dug her.  Though considered poor Appalachian, mountain trash, Ellie has grit and is determined to make a better life for herself.  Too bad she doesn’t get very far along that path before she is possessed by a real bitch of a goddess, Saroya the Soul Reaper, and her life becomes a living hell of blackouts and mass slaughters until she finally finds herself stuck between a rock and an electric chair.  Ellie’s a fighter, though and she never gives up trying to escape the nightmare her life has become.  Forced to become Lothaire's prisoner, Ellie never stops challenging him, she refuses to cower in fear.  This girl has a spine of steel and a set of brass balls.

Lothaire... I'm not sure what word to use to describe him.  Douchebag?  Not strong enough.  Asshole?  He's beyond that.  Let’s just say he's a grade A dick, charmless… although colorful.  He's intense, super sexy, great in the sack and super rich.  A typical romance hero.  But, there really isn't anything likable about Lothaire.  And, therein lies my problem with this romance.  He’s got a shit personality.  He's a bigoted human hater who pretty much emotionally tortures Ellie.  He belittles and humiliates her at every turn.  He threatens violence towards her and her family, and because he is the Enemy of Old, this is no empty threat.  He's absolutely vile to her.  It's hard to come back from that kind of behavior.  Even when Lothaire decides that Ellie is the girl for him (and really, duh, it took him long enough), he's still a jerk-face.  His redemptive moment comes late (really late), in the story but by then, I felt it was too little too late. And I really mean too little.  There is no way that that moment would change a 1000+ year old dude’s behavior.  Sure he loves Ellie, but he doesn't really know what love is and I don't think he ever learns.


Granted, Lothaire suffered horrible, heinous things at a young age which is supposed to excuse why he is the way he is but... the dude had been around a long, long, long time.  No matter what happens to someone as a child, that doesn't excuse their actions as an adult.  And that's another thing.  If you have spent the last 1000+ years being the scourge of the Lore, the guy that disgusts even the worst of the worst, the love of a good woman ain't gonna change you.  That is who you are.  No matter what the reasons for why you turned out that way - that is who you are.


Which is not to say that I thought Lothaire was completely irredeemable; I just don't think Cole managed to redeem him.   Oh sure, Lothaire finally does understand what he put Ellie through but that doesn't seem like it did much to change his character.  He's still an awful person.  Look.   A dick in love is still a dick.


Honestly, while I totally see why Lothaire falls for Ellie, I don't get what she sees in him.  The only way I could believe that Ellie would fall for him was if she was suffering from Stockholm syndrome.  What does she see in him?  Besides the smoking hot outer shell and the talent in bed?  Why would she even like him, let alone love him?  Even when he began to see her as her own person, as an individual, he was still a jerk off.  I mean, the dude turns Ellie into a vampire against her will.  She flat out tells him no and he ignores her because he knows what’s best for her.

That being said, this was still a highly readable novel; never dull, with further insight into the already interesting world that Cole has created.  It may sound like I hated this book, but I didn't.  I found it enjoyable.  I just didn't get the relationship.  I thought the romance was unbelievable.  But there were still things I enjoyed about the story and, while Lothaire may have been a dick, he was never dull.  He's actually a great character.  A shitty mate, an abusive jerkface ... but a great character.

I do love this series and as I said, this entry didn't bore.  There are lots of things I liked in this story and the actual plot was decent, if a little static. But I couldn't get past the unbelievable romance  If you like Cole, be sure to check it out, the stakes in the long term series arc have just been raised again in an already high stakes, action packed world.  But if you haven't read any books in this series, I wouldn't start here.
GRADE: C

Just a side note: Nix does make an appearance. She is my absolute favorite character in the series. I’d love to see a book about her but I don't know if it is even possible. She's so wackadoodle nucking futs Nix that I don't know how she could ever have a relationship without sacrificing everything that makes her such a great character. Although, we do get see a little bit of another side to Nix in this story.  Yay!

Warning;  this book ends on a cliffhanger.  Not involving the heroine and hero's relationship but on the future of the long term story arc.  I didn't have a problem with it but I know some folk are touchy about that kind of thing...


Where'd I Get It: from PBS.com