Review: Dead on the Delta by Stacey Jay

In a genre overrun with dark, tortured heroines, it is still rare to find those that are truly fucked up. Dark and tortured is often used as wallpaper, an interesting background but with little depth. One thing missing from these types of characters is the self-destructive behavior that can accompany a horrible past.  So, it is invigorating when an author takes into account how tragedy manifests in behavior and goes beyond the angry loner character with a taste for smart ass quips. 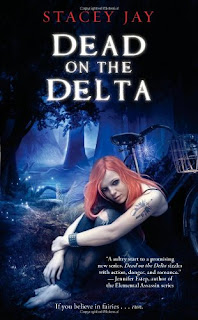 Dead on the Delta by Stacey Jay
Annabelle Lee, #1
ISBN13: 9781439189863
ISBN10: 1439189862
Published May 31st 2011 by Pocket
Grade: B
Blurb: Once upon a time, fairies were the stuff of bedtime stories and sweet dreams. Then came the mutations, and the dreams became nightmares. Mosquito-size fairies now indulge their taste for human blood—and for most humans, a fairy bite means insanity or death. Luckily, Annabelle Lee isn’t most humans. The hard-drinking, smart-mouthed, bicycle-riding redhead is immune to fairy venom, and able to do the dirty work most humans can’t. Including helping law enforcement— and Cane Cooper, the bayou’s sexiest detective—collect evidence when a body is discovered outside the fairy-proof barricades of her Louisiana town.
But Annabelle isn’t equipped to deal with the murder of a sixyear- old girl or a former lover-turned-FBI snob taking an interest in the case. Suddenly her already bumpy relationship with Cane turns even rockier, and even the most trust-worthy friends become suspects. Annabelle’s life is imploding: between relationship drama, a heartbreaking murder investigation, Breeze-crazed drug runners, and a few too many rum and Cokes, Annabelle is a woman on the run—from her past, toward her future, and into the arms of a darkness waiting just for her. . . .


I’ll be straight up – I've been trying to write this review for weeks. This was a difficult book to read and there were points when I had to put it down for a bit.  Not because it was bad (I enjoyed the story), but because the heroine is such a mess.  As a functioning (sorta), alcoholic, Annabelle Lee is slowly killing herself; she doesn’t just fuck up, she is a fuck up.  But because Annabelle's behavior felt emotionally true, I’d pick the book up again, hoping she’d get her shit together before it was too late.

Annabelle lives in a world where fairies are not only real but they have mutated and are now dangerous to humans.  Though not much bigger than a mosquito, their bite is deadly.  Before the threat was fully recognized, a teenage Annabelle and her sister went camping in the bayou where they were attacked by fairies.  It turns out Annabelle is one of the few who are immune to fairy venom. Her sister, however, was not so lucky and she died.  Survivor’s guilt (among other childhood issues), have done a number on Annabelle and she has grown up into a fantastically flawed woman who stumbles drunkenly through life. Working as an evidence collector for local law enforcement on fairy-related crimes, Annabelle becomes involved in the murder of a child, further complicated by the arrival of the FBI (which includes her ex).

Stacy Jay gives us a solid mystery populated by complex, (really) flawed characters and a setting that is vividly drawn.  And her unique take on fairies adds further menace to this grim, dystopian world.  But because of the heroine's issues, I often found myself cringing.  Annabelle has no emotional survival instinct which, at times, renders her pitiful and if it weren't for the believable, drunken chord she strikes, I don't think I could take it.  At the same time, I found Annabelle a refreshing character type for the genre and so, I am also intrigued.

I'm going to see where this series is going.  This is a tricky heroine to pull off and my hope is that the author can do it. There is a sense that things could go horribly wrong with this series at any moment and so, Jay will need to strike a careful balance. Too much one way and the heroine becomes so pitiful that she moves from can't-look-away straight into can't-look.  Too much the other, and the story becomes treacly, unbelievable and diminishes some very serious issues. The second book in the series, Blood on the Bayou, will be out at the end of March and I'll be reading it. There is the potential for something great here... or incredibly tawdry.  I'm hoping for the former.
Grade: B


Where'd I Get It: via PBS.com